An illustration manifests “thought” through the viewer’s decoding of visual-based representation—be it text-based, image-based, or a combination of both. Logocentrism holds that original thought generates a need for spoken communication and, in turn, speech generates a need for writing. In a daily ritual since 2008, I redraw exact-dialogue fragments of overheard conversations as 7×11-inch India ink illustrations (combining direct-quote text with visual and tonal embellishment) and combine the single illustrations into larger, theme-based conversations between people who have never met or exchanged words. When amassed together as modular narratives, my black and white drawings—collectively titled You Look Like The Right Type—start having grayscale conversations with one another across time, place, age, and gender (the who, what, when, where, why, and how of journalistic-narrative documentation). And the audience, as interlocutor, triangulates the conversation by reading that which was once spoken and making their own non-linear, grayscale associations between text, image, and completion of what’s left unsaid. Thus, original thought emerges not only through my reinterpretation of other voices, but also through z-axis, non-linear readability (or, Scott McCloud’s “infinite canvas”).

In his 1967 text, Of Grammatology, Derrida argues for a definition of grammatology in which written language is not derivative of spoken language, but, rather, the two become independent, legitimate signifiers for original thought. Thus, the written word (including text-based illustration) can be understood from a stance as comprehensive as the spoken word. Within my You Look Like The Right Type series, I’ve been archiving daily conversation fragments as black and white illustrations since 2008 in a ritualistic effort to not only bring permanence to the spoken form, but also to manifest original thought—via the recycled thoughts of others—within illustrated type-and-image works on paper. In keeping with the principles outlined in Derrida’s text, I argue—using my archive of 3,000+ illustrations coupled with theories of documentary-style narrative, montage editing, logocentrism, and the z-axis of non-linear comic paneling—that spoken language and written language are autonomous and equal forms of communication, feeding off of one another to generate new storytelling.

An archive of these daily works can be found at YouLookLikeTheRightType.com.

“Men and women do not want to move back, but the mark of youth has been branded in their heart. This is not their hometown, but with a deep nostalgia as well.”

As a unique specimen of Chinese urbanization, the villages “DaChong” and “GangXia” in Shenzhen, China represent a bridge between rural and urban. With the huge gap between disadvantageous groups and mainstream society, the existence of villages in the city created a buffer zone between low-income workers and the high cost of living. Unfortunately, in recent years because of ongoing urban renewal development, the villages have been razed and are now flat ground. Victims of high speed economic development, the villages of Shenzhen are disappearing, and because of their absence the names “DaChong” and “GangXia” are becoming as meaningless and vague. The multimedia installation “Villages in the City” incorporates vernacular typography used for signage with phrases like “ I LOVE YOU” and “I MISS YOU” to explore what should we learn and remember from these places.

The names “DaChong” and “GangXia”and shapes used to create their Chinese characters are data carriers as are the handwritten advertisements found on the walls of buildings. They provide with a wealth of living information about daily life in the most densely inhabited district in Shenzhen. Documentary photography, neon and stainless steel characters are used to create compositions, which reveal traces of the environment where immigrant working class citizens used to live. Text and imagery of messages from people for looking for or advertising jobs, information about selling Chinese herbal medicines, and telephone numbers of movers are combined with house numbers, street names, and the price tags from street foods to produce site-specific installations which serve as constructive links to former residents while recreating memories of village nights. “Villages in the City” is a memorial for the loss of history and an exploration aspect of village life that should be remembered.

ZoneA/Zone1 took place during the Fall 2013 semester of a graduate-level design studio, at a design school in New York City.
Using the NYC Special Initiative for Rebuilding and Resiliency (SIRR) Report as a departure point, our teams engaged with the five most affected communities in NYC through qualitative research in the form of cultural probes and interventions, addressing each area’s unique relationship to the city’s waterfront and impacting climate change, ultimately creating a set of proposals and in some cases, implementing solutions and toolkits serving to improve grass-root resiliency efforts in each community.

Our objective was to design a responsive communication strategy as well as individual or community-led activities that advanced resiliency efforts and foster behavior change, putting preparedness at the fore. The goal was to inspire and engage a community to take action.

We concentrated on the following 5 communities identified in the NYC Special Initiative for Rebuilding and Resiliency (SIRR) Report: A Stronger, More Resilient New York

Our initiative focused on qualitative research strategies to utilize design as a means for transformation. With an emphasis on a human-centered, holistic, and empathic approach, our teams applied Design Thinking methodologies to localized problems and issues in an attempt to transform the behaviors of individuals in desirable and sustainable ways, while creating meaningful experiences and interactions.

Emphasizing that people are participants rather than simply users, we studied human factors — cognitive, physical, emotional, linguistic, social and cultural behaviors. We explored numerous conceptual and procedural frameworks which guide the design process, in order to address the needs of people and organizations, and convert them into progressive, sustainable solutions.

By definition criticism presents negative connotations. In philosophical terms, criticism is not an action but a method of systematic analysis of a written, oral and visual discourse. It involves merit recognition and it means a methodical practice of doubt. Design criticism has had a short life story and never reached the popularity of Architecture or Art criticism, Film or Literary criticism. Probing design work is perceived as a threat, especially in a time when liking is the expected way of supporting peers both within and outside of social networks. To like and express appreciation for the work of others is a consolidated strategy to get noticed and welcomed in a community of practice, especially among the young generation.

Support is rarely shown through critical encouragement and is mostly communicated through unconditional recommendations; endorsement is seen as a currency to be exchanged regardless of the intrinsic value of a certain production. The problem gets exacerbated by the platforms we use to contribute to disciplinary conversations: symposia, conferences, talks are now always recorded and publicly streamed. This public exposure does not support attempts to make critical analyses; streaming is an opportunity for advertising others or yourself, your connections and your relevancy. Public speeches are opportunities to create connections the so called shoutout to other projects, friends or celebrities. In a time where positivity is the currency nobody wants to practice doubt.

We can consider the process of criticism to be equivalent to making strategic decisions it is a part of how we govern ourselves. Strategies are rarely discussed out in the public, but within a dedicated environment where the social rules of conduct are made explicit and intentions are shared. Similarly, design criticism should be fostered and cultivated within purposebuilt platforms. Design criticism needs a home more than ever. Analysing, considering or dissecting design discourse is a contribution to the politics of truth and criticism is the art of not being governed quite so much.

The term “design” (Latin designare, to designate) is defined as “intent.” Technology, from the Greek techné (art, craft), are tools derived from the deliberate application of knowledge. Design and technology are therefore inseparably rooted in their common meaning as the deliberate instantiation of ideas.

Vilém Flusser, in his 1993 essay About the Word Design, explains design as a “bridge” born during the Industrial Revolution, which attempted to close the “sharp division between the world of the arts and that of technology” in place since the Renaissance. For Flusser, design is a reunion of “equals” which makes “a new form of culture possible.”

But is design really a reunion of art and technology? In the face of converging trends in art, technology and design, Flusser’s typology is outmoded. His view still maintains a separation between art and technology, and while he ascribes a strong causal value to design as a cultural arbiter, he over-expresses its dependency on technology and ignores art as an intrinsic expression of technology. In short, neither art or design are defined as technologies, thus rendering his entire equation untenable.

However, if we designate both art and design as technologies, and accept that the former is primarily preoccupied with intrinsic expression and the latter with extrinsic functionalities, we can readily assign technology as the universal constant from which all knowledge, inventions, and creative expressions — in effect, all culture — emerges. By assigning equal value to art and design as manifestations of technology, we can better grasp the convergence in methods and intent that are common to these disciplines today. Moreover, this alternative formula provides room and equal footing for liberal arts and social science co-products such as philosophy, political theory and the institutions which sustain them, all key technologies and human inventions essential for design and artistic development.

Places are part of our identity. Our memories and experiences are tied to places, and yet in a world where we increasingly use digital means for everything, there’s no good way to mark a place as special to us, or to connect with the other people for whom that place matters. GPS is insufficiently precise and computer-vision-based augmented reality depends upon some kind of physical marker, a poster, a plaque, or other demarcation.

By fostering cyberliteracy in the arts, educators and their students can examine the digital artifacts of our time and embrace a dialogue that addresses the profound effects that digital art, such as Internet artwork, is having on youth culture in formal and informal learning environments. This research, through a series of interviews with four adolescent participants who have grown up as digital natives, explores an enhanced focus on cyberliteracy in visual arts education, on both the part of students and educators. Four major themes are explored: cybermedia literacy in art education, adolescent Internet use, the emotional and psychosocial development of the adolescent, and online identity construction. 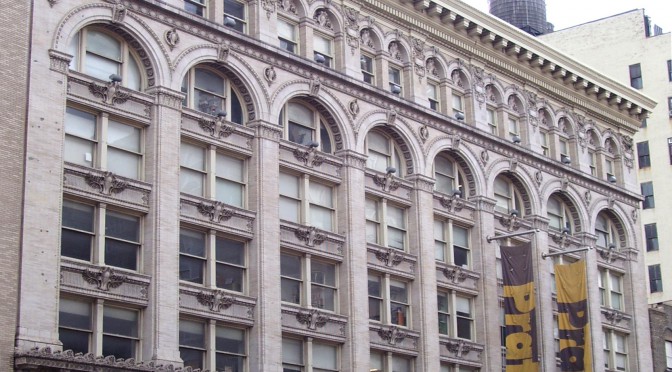 Design Incubation Colloquia 2.1 (#DI2015oct) will be held at the Pratt Institute, Manhattan Campus, Graduate Communications Design Department. This event is open to all interested in Communication Design research. RSVP with name and affiliations if you plan on attending.