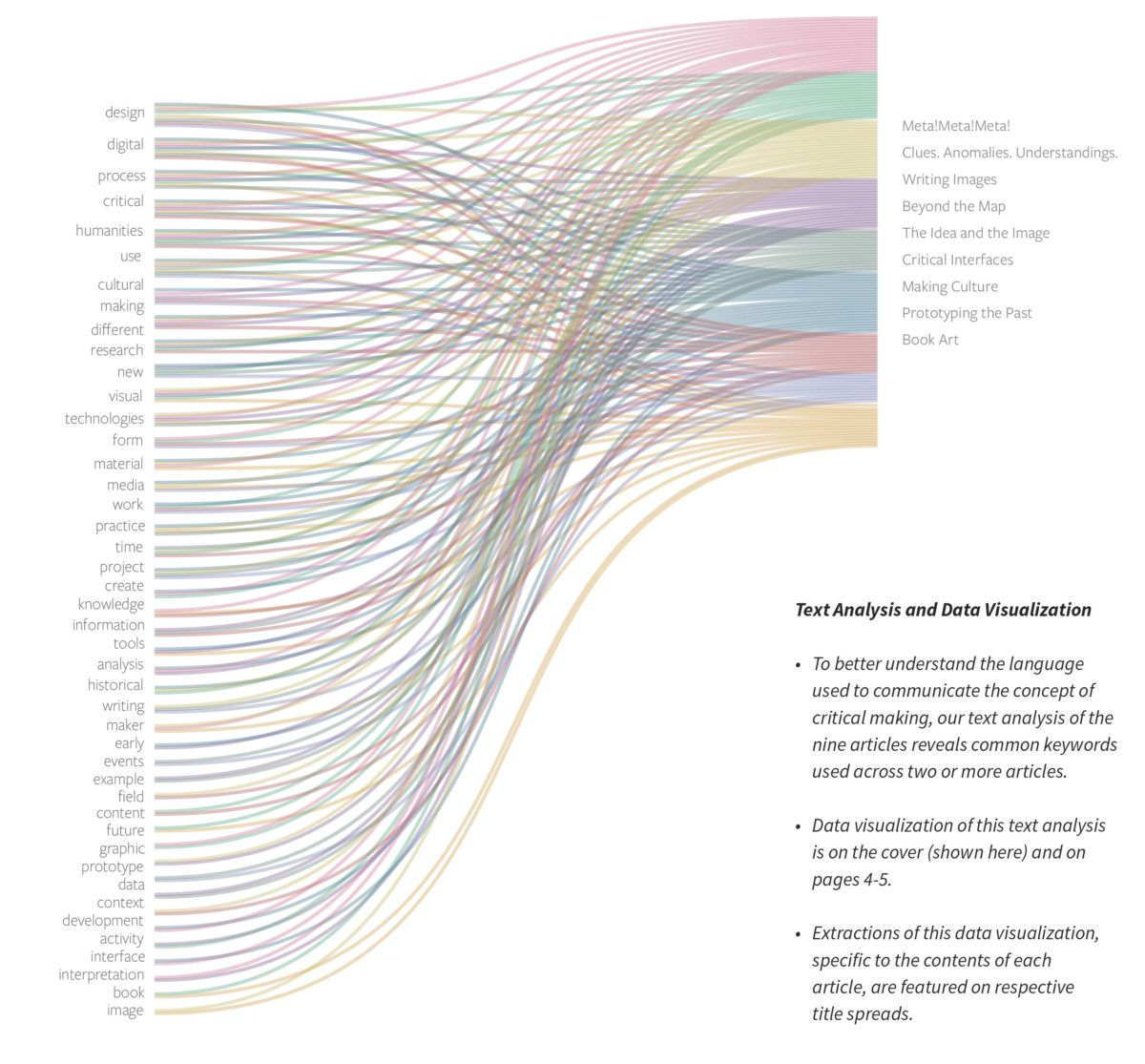 The idea for this special issue grew out of a mutual interest in the ways critical making in design connects with humanistic inquiry, and how this might form a foundation for research by design faculty. We viewed the project broadly as a finding tool because we observed a shortage of resources for design scholars on this topic. Critical making is an emerging framework that serves as a means to integrate research activity and practice-based artifact. It situates studio-based design practices as scholarship in ways that augment existing theories of design authorship, production, and thinking. The findings that occur within these activities become the crux of the endeavor and may produce as much knowledge as the polished, finished product.

As editors of the issue, our responsibilities included writing and circulating the international call for papers, facilitating double-blind peer review processes within two disciplines (design, and the digital humanities) and designing the issue layout, including the development of text analysis and data visualizations. Rather than advocate for each discipline to borrow and build off the other in isolation, this issue aimed to serve as a shared space to affect synergistic research, practice, and education. It became a research project in itself and is ongoing.

Two challenges were encountered in this project. First, Visible Language is a journal of evidence-based research and we focused on scholarship that is often considered exploratory. This meant determining, for all submissions, what constitutes rigorous ‘evidence-based research’ in theoretical and speculative inquiry, and in effect, publishing articles to serve as models for work of that nature. Second, the issue needed to connect research within disciplines that have significant overlap yet are just beginning to formalize their commonalities. The final issue needed to represent new knowledge, and be peer-reviewed, at a transdisciplinary intersection.

The final issue was published in print (approximately 700 copies distributed) and online. The online distribution coincided with the fiftieth anniversary of Visible Language and launch of its new open access web site; as a result, our full issue was readily accessible to all visitors to the new site. The issue contains nine articles by an international group of authors, and these were organized into two areas that blurred disciplinary boundaries: Theories and Speculations (methods and systems to facilitate research), and Forms and Objects (publishing, prototyping, and hacking practices). These published works have the potential to critically impact the ways we read, write, play, imagine, and learn across disciplinary boundaries, and exemplify non-traditional academic research methods for design and digital humanities scholars. This project served as a catalyst for the AIGA DEC conference Converge: Disciplinarities and Digital Scholarship we co-organized (spring 2017) and has been referenced in various other venues (see outcomes PDF).

Jessica Barness is an Associate Professor in the School of Visual Communication Design at Kent State University. Her research resides at the intersection of design, humanistic inquiry, and interactive technologies, investigated through a critical, practice-based approach. She has presented and exhibited her work internationally at venues hosted by organizations such as the Design History Society, HASTAC, and ICDHS, and she has published research in Design and Culture, AIGA Dialectic, Spirale, Visual Communication, SEGD Research Journal: Communication and Place, and Message, among others. Recently, her interactive work has been on display in the traveling exhibition Édition, Forme, Expérimentation, curated by Collectif Blanc. She co-edited (with Amy Papaelias) a special issue of Visible Language journal, “Critical Making: Design and the Digital Humanities” and is a member of the organizing committee for AIGA Converge conference, June 2017. She has an MFA in Design from the University of Minnesota, Twin Cities. jessicabarness.com

Amy Papaelias is an Assistant Professor in the Graphic Design program at the State University of New York at New Paltz. Presentations of her creative work and pedagogy at national and international venues include the Type Directors Club, Digital Humanities, Theorizing the Web, TypeCon, and the College Art Association. She has been involved with several digital humanities initiatives including One Week One Tool, and serves on the Advisory Boards of Beyond Citation (CUNY Graduate Center) and Greenhouse Studios (University of Connecticut). She co-edited (with Jessica Barness) a special issue of Visible Language journal, “Critical Making: Design and the Digital Humanities” and is a member of the organizing committee for AIGA Converge conference, June 2017. She co-authored a chapter (with Dr. Aaron Knochel) for Making Humanities Matters (University of Minnesota Press, 2017). She is a founding member of Alphabettes.org, a network for promoting the work of women in type, typography and the lettering arts. amypapaelias.com