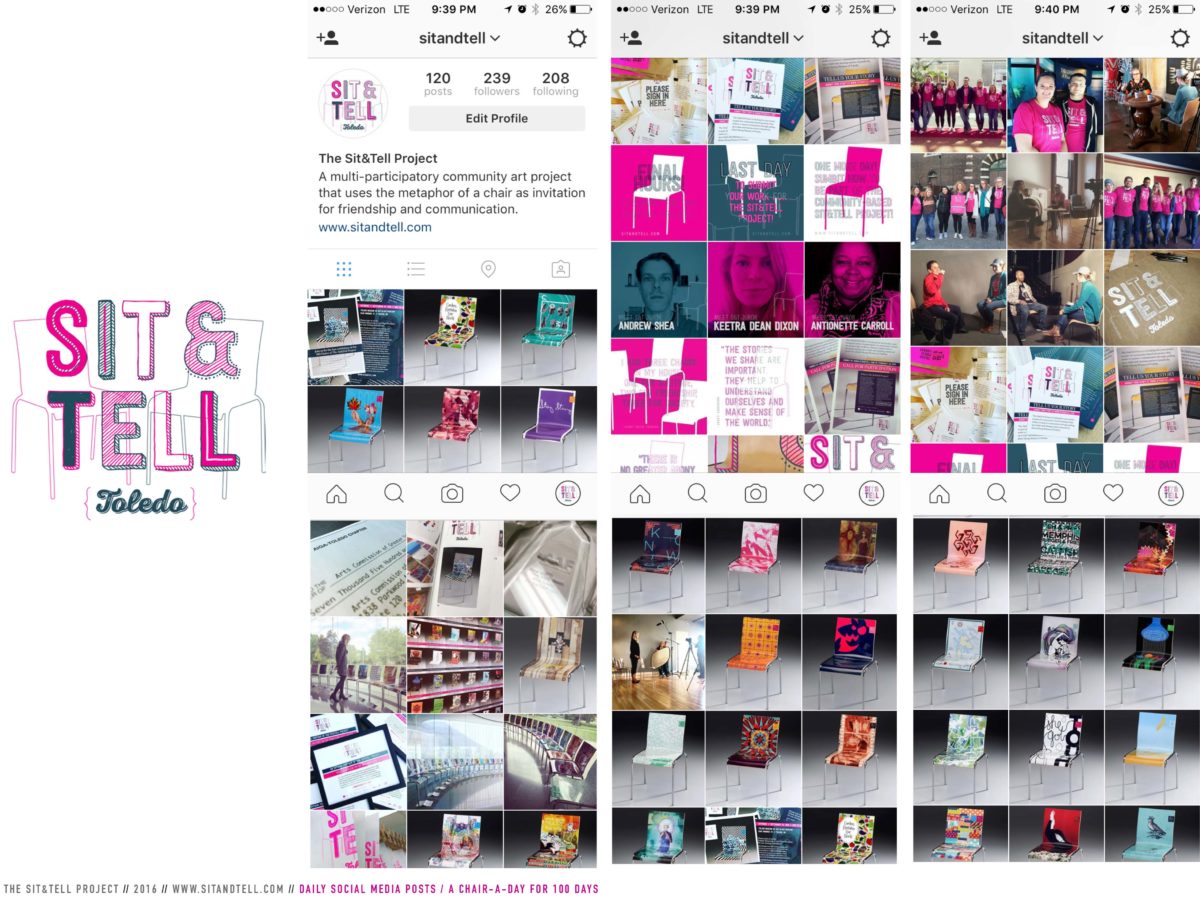 The Sit&Tell Project was a multi-participatory community-based art project that connected communities through pulling up a chair and sharing stories of Strong Women of Toledo. The project collected 100 stories as told by Toledo citizens as storytellers on World Storytelling Day (WSD), March 20, 2016 under the global theme of Strong Women. Based on the Toledo Arts Commission’s 2015 Strategic Plan for Arts & Culture, eight (8) neighborhoods were cited to illuminate, thus were chosen to be the sites of the story collections. On WSD, teams were sent to the Collingwood Arts Center, Toledo Public Library, The National Museum of the Great Lakes, The Ohio Theater, the Sofia Quintero Art & Cultural Center and The Fredrick Douglass Community Center to collect the 100 stories through in-person interviews. These recorded stories were told by or were about women recognized by their families, communities or organizations as strong and influential. Following the collection, the stories were assigned to juried (jurors: Andrew Shea, Antionette Carroll, Keetra Dean Dixon) artists/designers to visualize 100 chairs. The donated chairs from MTS Seating went on display at rolling exhibitions in those neighborhoods throughout the summer of 2016 with each chair containing a specific URL numbering to direct viewers to the corresponding audio recording of the story.

A preview event for 150 guests on June 14, 2016 unveiled 30 chairs at AIGA Toledo’s Pre-conference Cocktail Reception + Welcome talk for AIGA’s Nuts+Bolts Conference, followed by the first neighborhood launch of ten (10) chairs at the National Museum of the Great Lakes, with positive local press. During the summer a chair a day for 100 days was posted on social media outlets. All 100 chairs were featured in a final closing exhibition at the Toledo Museum of Art on September 24, 2016. In November, the chairs were sold through an online auction and the $7,500 raised was donated to the Toledo Arts Commission for art classes for young people in those neighborhoods.

Jenn Stucker is an associate professor and division chair of Graphic Design at BGSU. She earned her BFA at BGSU and her MFA from Eastern Michigan University, both in graphic design. Jenn’s research interests include Design as Artist and Practitioner, Design as Scholarship of Engagement, and the Scholarship of Design Pedagogy. Her work has been published in several books on design and has received various award recognitions including, HOW Magazine’s 2013 and the 2017 International Design Awards for her community-based works, The You Are Here Toledo Project and the Sit&Tell Project. She is the co-founder/organizer of SWEAT (Summer Workshop for Experimentation and Thought,) a collaborative experience in experimental modes of making. She is also a founding board member of AIGA Toledo and has served in numerous leadership roles. Jenn has previously co-chaired two national AIGA Design Education conferences and has presented at several conferences across the country.