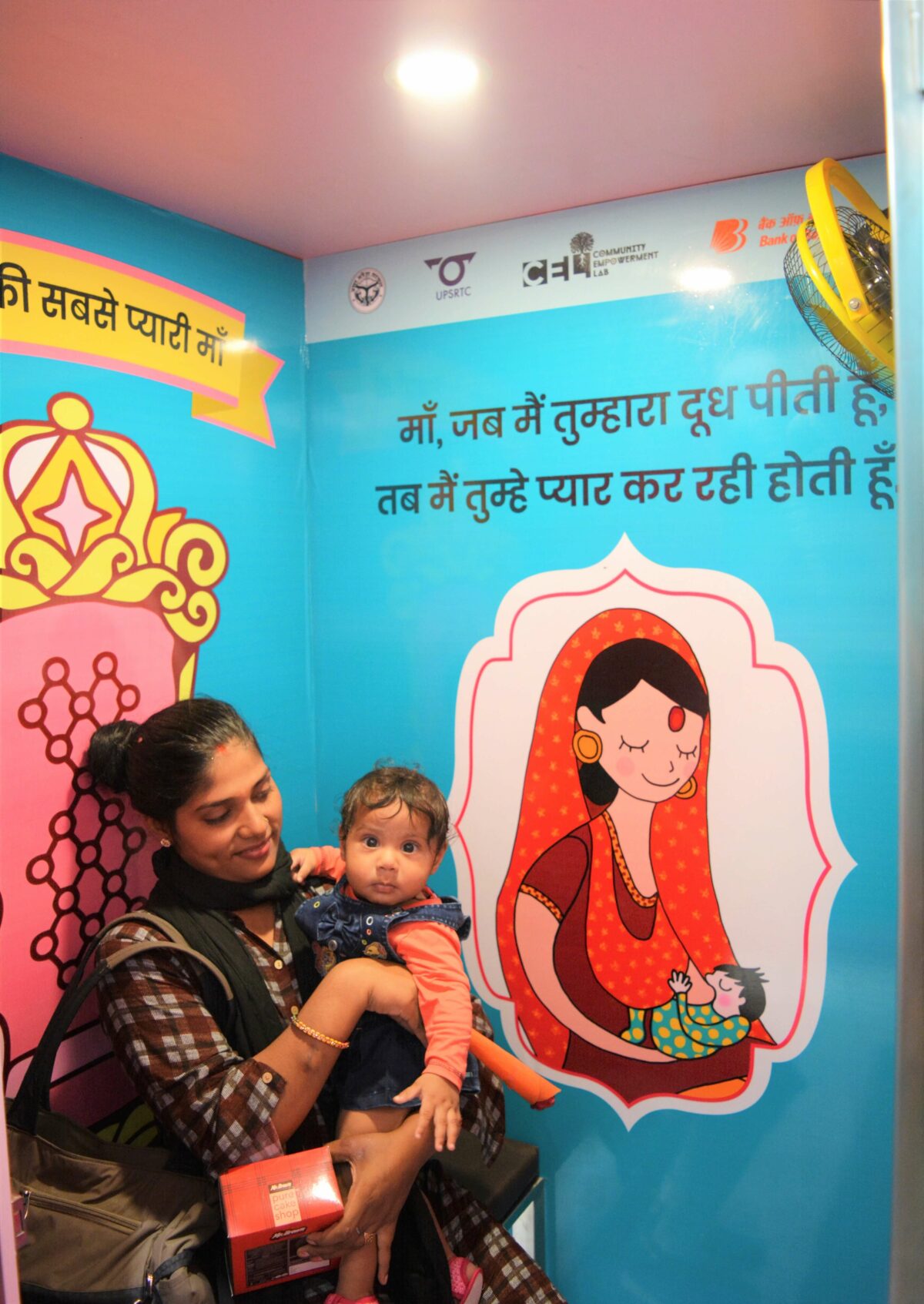 Exclusive breastfeeding till six months has the potential to save ~8,20,000 babies. The State of Uttar Pradesh (U.P.) in India loses ~2,00,000 newborns annually, making it the global epicentre for newborn deaths. However, simple interventions like early initiation within 24 hours after birth and exclusive breastfeeding till six months aid newborn survival. But despite ongoing awareness and advocacy around the benefits of breastfeeding, the progress and uptake still remain low. The National Family Health Survey-4 (2015-16) reports that in U.P. only a quarter of infants were being initiated to breastfeeding within an hour of birth, and only a quarter continued to be exclusively breastfed till six months.

A 10-days design sprint and partnership with Uttar Pradesh State Road Transportation (UPSRTC) in 2019 led to U.P.’s first Breastfeeding Cubicle at a public bus station in the State’s capital, Lucknow. This project aimed at

a) Creating an enabling environment for breastfeeding within the bus station;

b) Communicating value around breastfeeding and respectful care for nursing mothers through Communication Design, thereby shaping behaviors; and

c) Reinforcing ideal behaviors around breastfeeding through nudges in the form of communication materials.

The approach of the participatory design was adopted, wherein the communication collaterals in the form of cubicle wall panels were co-designed and rigorously tested with a cohort of mothers from the target audience. Insights from consultations with key stakeholders within the health system and UPSRTC were also included throughout the design process. The Breastfeeding Cubicle is a safe haven for traveling mothers who want to nurse their infants in a public place like a bus station. The wall panels act as a catalyst to nudge mothers to breastfeed their baby, through the use of storytelling aided by contextually relevant illustrations.

The idea of having a Breastfeeding Cubicle at public bus stations was birthed by the sight of a mother struggling to nurse her infant in a busy bus station at Lucknow. The Managing Director of UPSRTC (Dr. Raj Shekhar) was taken aback to see the plight of the mother and decided to create a comfortable space for mothers to freely breastfeed their babies. Our team was commissioned to develop the wall panels for the cubicle, which was led by the designer.

Potential personas were mapped, based on insights gained from the Formative Research conducted as part of a Gates-funded grant to strengthen breastfeeding practices through Kangaroo Mother Care, as well as exploratory unstructured interviews with urban as well as rural mothers and Agrimaas (respectful care champions stationed at the Kangaroo Care Lounges in public health hospitals of Raebareli district). The Breastfeeding Support for Indian Moms (BSIM), a peer group on Facebook that aims at empowering mothers around breastfeeding was also used as a platform to gain an understanding of the “pains” and “gains” of breastfeeding i.e. common challenges faced by mothers and challenges specific to breastfeeding while traveling, from a larger sample set. Additionally, methods like role-playing and journey map were employed to build deep empathy and understand the current mental model of beneficiaries, along with a review of existing communication materials on infant nutrition. Insights obtained from all these activities helped frame certain guiding principles for the cubicle space as well as the communication materials to be used in it.

From the above, we learned that women who would avail the services of UPSRTC buses belong to middle and low-income families. Broadly, they can be categorized into:

• Mothers of babies younger than 6 months

• Mothers of babies older than 6 months

It was found that most mothers avoid traveling during the early months of the infant (less than 4 months). Therefore, our focus was on babies above 4 months which would include a mixture of breastfeeding infants as well as those on complementary feeding. As a result, one of the challenges for us was to bring a balance between information for these two types of infant categories in the existing architecture of the cubicle, with a major focus on reinforcing breastfeeding behavior. Messaging content for the communication materials in the form of wall panels were developed for the two categories of infants, with the common goal of calming down a hurried and anxious traveling mother in those 10-15 mins of the breastfeeding episode inside the cubicle.

On reviewing the existing communication materials, it was found that the tonality of the messaging was very instructive and direct. The desirable outcome (i.e. exclusive breastfeeding) was stated explicitly and contradicted the beneficiary community’s underlying socio-cultural reasoning. Therefore, our approach instead was to create a system that shifts behaviors and helps adopt ideal behaviors than merely changing them. A highly iterative process of co-designing and pretesting the prototypes with beneficiaries from seven public health facilities in U.P. was employed, along with inputs from health providers and UPSRTC stakeholders. During the pretesting, it was found that the shortlisted prototype version powerfully resonated with the beneficiaries and also affected their desire to not replace breast milk with other alternatives.

The above activities enabled the design and development of wall panels for the breastfeeding cubicle. In order to make it gender inclusive and balance any underlying gender connotations, the wall panels had a teal and fuchsia base. Principles of affect and salience biases were used to create a conversational and narrative-based messaging architecture and tonality. The messaging was framed as a dialogue between the mother-baby dyad, with the mascot (i.e. an infant) addressing key perceptions on breastfeeding through culturally grounded analogies, along with simple cartoon-style illustrations. Cues for messaging were taken from experiences shared by mothers during the interviews, which became instrumental in making it contextually relevant for the beneficiaries. In addition to this, a remote lactation tele-support system was also developed, wherein the nominee created the operational plan, call protocols, and a database.

U.P.’s first breastfeeding cubicle was inaugurated on 30th September 2019 by Shri. Ashok Kataria (Minister of State, Independent Charge for Transport). Data from pre-COVID times suggests that an average of five mothers used the Breastfeeding Cubicle every day, who found the space to be attractive as well as comfortable, and the messages to be intuitive. The wall panels have created a respectful and caring environment for severely resourced nursing mothers by nudging them towards the desired outcome of breastfeeding, without any imposition. Anecdotal evidence suggests that the vibrant color palette and illustrations grabbed the attention of most passers-by. Furthermore, the conversational tonality of the messages, especially the analogies, appealed to the beneficiaries’ cultural “sense”. With such a positive response, UPSRTC had also announced to scale this initiative across hundred bus stations in the State. However, the expansion has been on pause since early 2020 due to the pandemic, since all the resources across government bodies (including UPSRTC) have been directed towards COVID-19 relief efforts.

This project aimed at changing behavior of beneficiaries by reinforcing ideal behaviors to achieve the goal of breastfeeding. However, behavior change isn’t possible overnight. But what this initiative does is that it aids a gradual shift to achieving breastfeeding outcomes for such a critical social challenge in difficult terrain like U.P. through Communication Design. This initiative, therefore, acts as a stepping stone to achieving the larger goal of newborn survival in one of the toughest geographies in the world.

Sarah Tanishka Nethan is a Social Design Researcher working at the intersection of participatory design and Behavioral Science, and currently working as Lead, Family Planning & Reproductive Health at Vihara Innovation Network. Over the years, she has developed community-centric solutions across disciplines of public health (primarily Sexual and Reproductive Health; Maternal, Newborn and Child Health; and WASH), planetary health, gender, and education. An advocate for inclusion and Human-Centered Design, she is deeply passionate about building innovations at the confluence of local wisdom and Design that bridge the social-development equity gap within communities. Currently at Vihara, in addition to managing the FP-RH practice area, she is conducting a landscape analysis on measurement and evaluation within HCD+ASRH programs, with an aim to develop solutions for some pertinent challenges within this field. In the past, she has also worked on various multidisciplinary projects associated with the World Health Organization, Bill and Melinda Gates Foundation, UN Women, World Design Organization, Government of Uttar Pradesh (National Health Mission), and Stanford University, among others. She holds a B.Sc. in Fashion and Apparel Design from JD Institute of Fashion Technology, and Master in Design from National Institute of Fashion Technology, Mumbai.