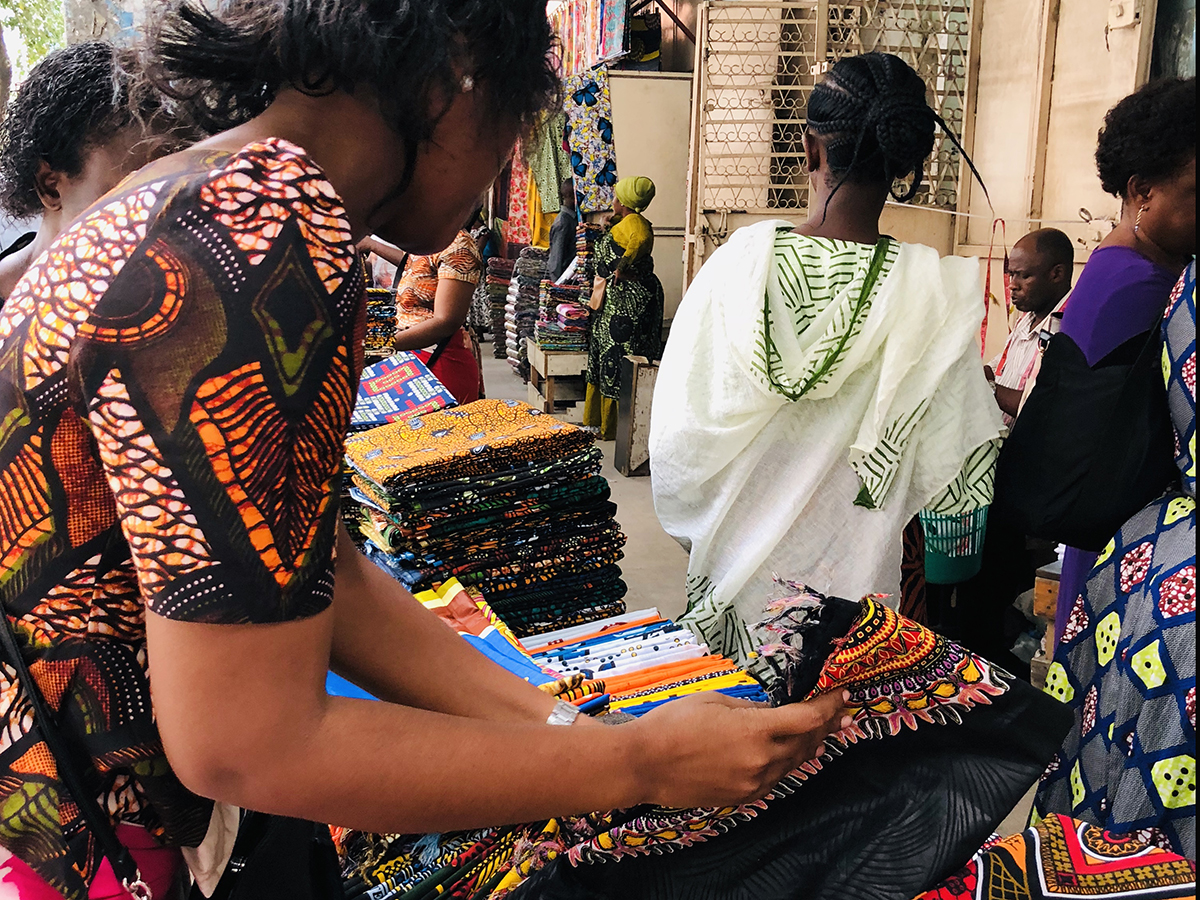 My interest in this project spawns from my own cultural history, one that I revisited when I embarked on a creative writing exercise during a sabbatical in 2011. As I thought of colors and language, images of the Kanga of my childhood emerged. As a designer, I realized in retrospect that this cloth was layered with meaning and needed deeper scholarly exploration on my part.

This paper analyzes the intersectional space between public and private that Kanga cloth occupy and the specific context that Kanga cloth are bought and sold in Tanzania and Kenya. Kanga are cotton fabric wraps screen printed, typically in three colors, that measure about 39 inches x 59 inches (100 cm by 150 cm). The structure of the kanga consists of three parts: a patterned border, a central design and a saying or proverb that is placed in a box, above the bottom border. They are produced in Tanzania and Kenya for the domestic market. Kanga are also produced abroad and imported from India and China. This study situates Kanga in the area of visual communication practice.

Because Kanga cloth occupies a unique discursive space, a case study approach allows for the retention of individual, personal voices and the specific context that Kanga are used. The corpus of this study is based on life story interviews of four women who sell Kanga in the Mchafukoge market, conducted during the summer of 2018. Because of the historical nature of this textile, the interviews also consisted of viewing the private collection and allowing the women to “read” the fabric and describe their personal history in relation to the storied cloth.

Kanga are significant because they inhabit an intersectional space between public and private when women wear them. A subtle, but important role of Kanga is its function as resistance (Beck, 2000). Women read the text and memorize it as associates with a certain pattern. So in passing, one may know the message contained on a Kanga without necessarily being able to read the inscription.

Therefore contextualizing Kanga as a historical visual communication practice and a contemporary political act is significant for two reasons: it fills a gap in the literature and it brings an East African interpretative framework to the objects of study. The significance of Kanga are the weaving of intercultural influences. Symbols, images and language express both the present and past narratives of the peoples that form Swahili identity. (Ressler, 2012).

Significantly, this project analyzes Kanga, worn on women’s bodies, as forms of intercultural communication and an affirmation of identity, which ultimately participates in acts of subversion and agency. This project considers Kanga as a visual text wrapped in history, social protest and gender politics.