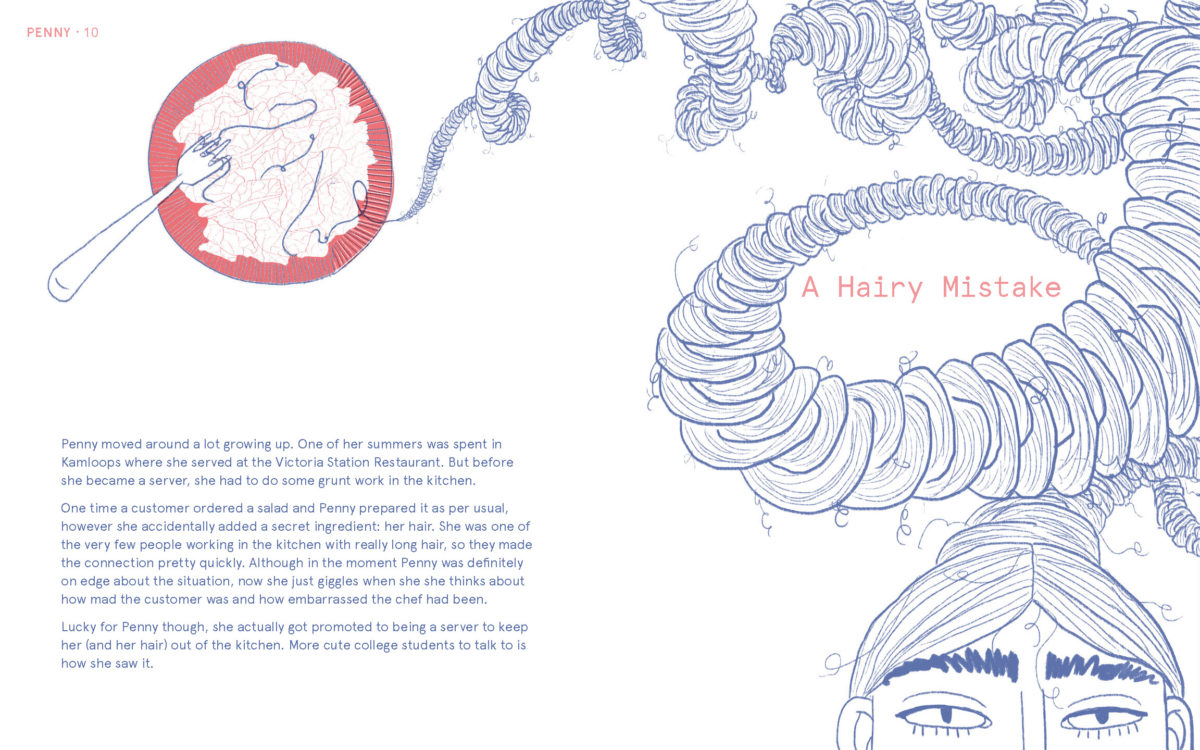 Perspectives brings together Communication Design students and residents of long-term care homes, creating a platform for meaningful intergenerational exchange and social interaction through the co-design and co-creation of mini-publications that express residents’ stories through writing, photography and other art media.

It’s not uncommon for residents of long-term care homes to face issues of social isolation and diminishment of personal identity, with opportunities for genuine creative and personal expression being limited. Residents can feel like they no longer have anything to contribute, that their story has closed, they’re unchallenged which often leads to cognitive decline. Design students tend to have limited life experience and are unsure about what direction they want to take in life. Perspectives explores the benefits of a reciprocal relationship between the two, engaging participants in a mutual exchange of experiences.

First, students and residents engage in “Getting to Know Me” sessions, during which they share information about themselves and learn about the other participants. Students then design activities using the limited knowledge they have about residents to uncover stories and points of interest they can explore during the Content Generation sessions that follow. This series of student-designed Content Generation sessions include creative approaches such as; storytelling, games, quizzes, drawing and collage. These activities act as creative probes to generate thematic starting points for narrative analysis and conceptual development, with emphasis placed on the mutual participation of students and residents.

A common observation is that the design students take non-linear approaches to storytelling, with content generation topics ranging from the importance of respect, to opinions on sharks to activities that focus on residents dreams and future aspirations. This leads to a diverse range of publications, with one telling the detailed story of a resident’s life as an animal trainer for 1950s TV and film, another focused on residents’ preferences for sensations such as taste and smell, and a third, comic book publication in which residents were represented as superheroes.

Students take material generated in the sessions and create initial editorial designs to be taken back for residents to review. Residents express their preferences on concept, copy, layout, typography, colors and composition. Following the review, students create multiple copies for a final sharing session. In this session all participants engage in a storytelling and sharing activity, with individual groups deciding how to share what they have made together, which often results in students and residents sharing stories together. These sessions are often highly emotional, with much laughter, and some tears, from all parties. Multiple copies are given to residents to allow them share their story with other residents, their families and care staff.

In the summer of 2018, funding was awarded from the Centre for Aging Brain and Health Innovation (CABHI) for an observational research study to investigate the impact of the project upon residents. The study concluded that the experience was an overwhelmingly positive experience for both residents and students. One resident, when asked about what they gained by participating in the program, explained, “Another look at the younger generation, what is going on with them and to see that they are with us, there is no separation between the ages, we are all the same.”

Anecdotal feedback from the care staff told of how residents would share their stories with carers and physicians who were able to gain a better sense of the resident, which could ultimately inform their care. A concern when starting the project was the lasting impact on the residents once students had left. We discovered that the project connected residents in new ways, forming new connections and friendships, while many residents began to engage with other programs in the home, becoming more social. When interviewed following the completion of the project, one member of staff said, “it brought some of the residents more social engagement. There were a few residents that stay in the room all the time. So, one particular resident was coming to see you guys in the group and they love telling their story.”

The benefits of the project extended beyond just residents, with the benefits for students also visible. Students participating in the project are in their third year of a four-year degree program, possessing strong design skills, but lacking experience of using those skills beyond a classroom environment. In a post-project survey one student noted, “It was really incredible to be able to spend time with seniors in the way that we did. I think there’s something really special about the bond between elders/youth.”

It’s not uncommon for many students approaching their final year of university to have something of an existential crisis, trying to find where they fit in the world as a designer. Perspectives engages the students in designing for an aging population for the first time, with many expressing an interest in revisiting that problem space in the future, something that is especially timely as the Canadian government recently announced its first Dementia Strategy. One student observed, “Western care homes are more often than not very cold and clinical, and in general not a very comfortable place to live. Designers have the skill set creativity and knowledge to help rectify this.”

Following three successful incarnations of Perspectives, in two different care homes, a “How to Guide” is being developed for other schools and care homes to run the project. A new application for funding has been made to CABHI to fund the publication of the How to Guide and I am currently in discussions with academic institutions, both national and international, about implementing the project and piloting the guide. The project has been presented at DementiaLab 2018 (United Kingdom), Design4Health 2018 (United Kingdom), the Canadian Gerontological Nursing Association 2019 and the Canadian Therapeutic Recreation Association Conference 2019, with papers currently being finalized for DementiaLab 2019 (the Netherlands), International MinD Conference 2019 (Germany) and the Canadian Frailty Network conference 2019. In April 2019 an article on Perspectives was published in the journal Design for Health (Volume 3, 2019).

Jon Hannan is Assistant Professor of Communication Design, having previously held the positions of Senior Lecturer of Graphic Design at Manchester School of Art and Senior Lecturer of Fashion Communication and Promotion at Nottingham Trent University. He holds an MA and a BA (Hons) in Design & Art Direction from Manchester School of Art, a Postgraduate Certificate in Education from Huddersfield University and is a Fellow of the Higher Education Academy (UK). Alongside teaching, Jon founded and ran Manchester-based design studio, OWT, for six years. OWT started as an experimental and collaborative publication before growing into a fully-practicing design studio. His research has been featured in international design publications, journals and online platforms such as Design for Health Journal, IdN, Computer Arts, the Guardian and CNN.