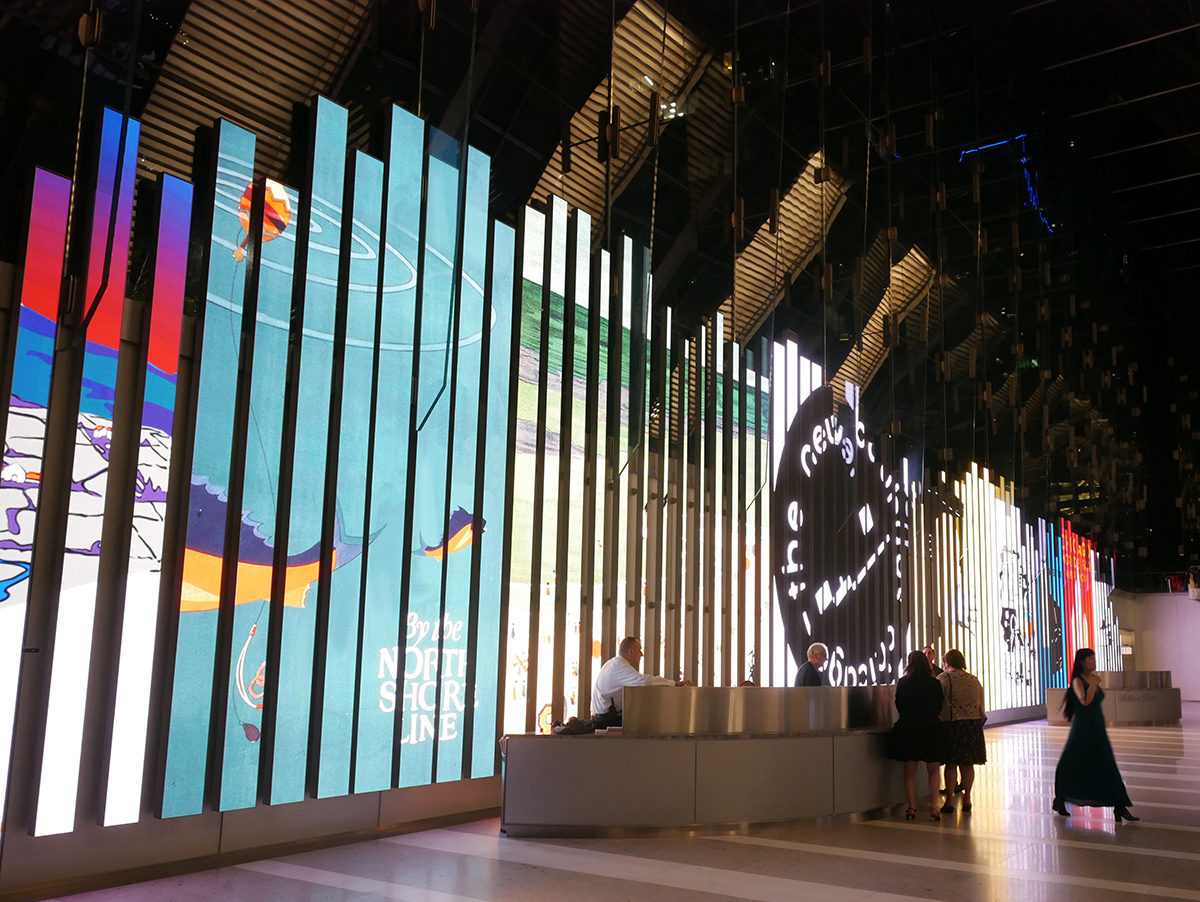 Chicago Design Milestones is a new media public installation that took place throughout July, 2019, at 150 Media Stream in Chicago. It brought to life the evolution of Chicago design by examining and showcasing the historic characteristics of design works from the 1920s to the present. Project material was researched and culled directly from the vast collection of the Chicago Design Archive (CDA), which holds over 3,200 works from over 1,100 designers and 400 firms. Members of the CDA, the UIC School of Design & Electronic Visualization Laboratory, and Columbia College Chicago collaborated together on this project as a team, as their underlying and ongoing quest is to spotlight the role of Chicago as a major national design center through the use of innovative technologies, including 150 Media Stream’s unique display structure, the largest media screen (3,000+ square feet) in Chicago.

The team consists of design educators, animators, and members of the CDA. It is worthy to note that the Milestones project was initiated by the design educators of the team. With knowledge of the holdings of the CDA, it was the design educators that conceived of the opportunity to collaborate, to develop initial concepts, and to lead the project. It is their belief and practice to author and generate projects of personal interest in order to help advance the field of design with designers’ own concerns.

The Chicago Design Archive is a singular organization in that there is no other like it doing this type of documentation and presentation of Chicago design work—locating, procuring, organizing, and showcasing Chicago-related design in the form of images as well as articles, essays, interviews, and videos. This includes works from the pre-digital era, with the population of works beginning in the 1920s. This is over 100 hundred years of Chicago design work gathered up and organized in one place.

A significant challenge of the Milestones project was to figure out how to represent the thousands of archived works from the past 10 decades. The process of curating the works was scientific in that observation was key—untold hours of patient looking. Year by year, decade by decade, each image was scoured until 100 years of images passed in front of the eyes of the team. There wasn’t an agenda when the team first started looking, no plan of what to find, no expectations. The team wanted the images to speak to them, to tell them what was significant—and they did. In each decade, the images showed what colors they liked, what shapes they preferred, and very interestingly, what stories they held. Some of the images spoke more than others. They were the ones that were singled out as possibilities. From this pool, images were selected based on their potential for animation and their inherent magnetism to engage, inform, and spark the curiosity of any passerby.

Another challenge was to figure out how to best employ the distinctive installation structure of 150 Media Stream, which comprises of 89 LED vertical blades that reach varying heights up to 22 feet high and span 150 feet wide. This configuration forms a vertical pattern that is combined with extreme horizontality—interesting but opposing dynamics built into the structure. These are constructs the team intentionally utilized, by ensuring that particular images animate to traverse the unusual terrain.

The Milestones project is out of the ordinary in that Chicago design history is rarely brought to the attention of the general public. Bringing awareness to historically-relevant creative work was central to the project’s intent and importance. The project afforded design history outside of the confines and prompting of a book, classroom or school, and it was instead framed in the context and excitement of an immersive technological experience. The completion and success of this experiential design project has lead to ideas and invitations for further work at other public venues for new media at the international scale.

In advance of the debut of Chicago Design Milestones at 150 Media Stream, a preview gala and exhibition was held at Archeworks—a Chicago-based design lab and media outlet dedicated to using design as an agent of change in the public interest. The preview exhibition (lead by Lauren Meranda of CDA) featured the static images of the works selected for animation in Chicago Design Milestones.

For the opening of Chicago Design Milestones, a catalog was produced. It contained images of all of the design works included in the project as well as related examples of work from the Archive. It was an opportunity to not only celebrate the works selected for the project but to also highlight additional CDA holdings. The catalog further documented the team’s research by including the lists of descriptive terms that were generated and used to characterize the design and themes for each of the decades. Considered to be a valuable component of the project, the Chicago History Museum is presently acquiring the catalog for their collection.

In the end, the team hoped to engage onlookers and inspire them with the city’s creative history. Perhaps viewers delighted and marveled in what they saw. Perhaps they felt a sense of nostalgia, a feeling of pride for the city, or gained a stronger appreciation for Chicago history and design. Additionally, by example, the team hoped to have widened the conceptual space for designers, to explore, research and play.

Holding an MFA in Graphic Design from Yale University and BFA degrees in Graphic Design and Photography from the University of Illinois at Chicago (UIC), Sharon Oiga’s work investigates the process of design — the ways in which ideas are expressed and disseminated, ranging from the micro level of experimental typographic form to the macro level of self-authoring and publishing. At UIC, she is an Associate Professor and Chair of Graphic Design. Previously, Sharon partnered with design firms where she specialized in identity, branding, publication design, and packaging. Her work is consistently recognized through awards, publications, exhibitions, and funding. A two-time recipient of the Sappi Ideas That Matter grant, Sharon was also honored to receive the UIC Silver Circle Teaching Award. She has written about her teaching in UCDA’s Designer Magazine.

Sharon serves as Chair of the Society of Typographic Aficionados, and she is a Director of the Chicago Design Archive.

Holding a BFA in Graphic Design from the University of Illinois at Chicago, Guy Villa Jr

is an Assistant Professor at Columbia College Chicago. His research interests include procedural image-making and photography, and experimental design processes. He has professional experience in editorial and identity design for not-for-profit organizations, start-ups, and other businesses. In recognition for his work, he was named a Platinum Winner by Graphis, for which he was interviewed and featured in the Graphis Letterhead 7 book. He was also interviewed by Print magazine, and his work was published in the annual. Aside from teaching, Guy speaks regularly at regional, national and international confer- ences and events. He is also Chair of the STA Design Inspiration Weekend, an annual forum for designers held by The Society of Typographic Arts. Recently, he was a juror for the international TypeCon Typography Award and a proposal reviewer for the TypeCon Education Forum.

Holding an MFA in Computer Graphics from Syracuse University, Daria Tsoupikova is an Associate Professor of New Media Design at the University of Illinois at Chicago. Positioned at the crossroads of artistic and technological innovation, her research and artwork explores the potential of new media and inter- activity in relation to traditional arts. Through the development of virtual reality (VR) art projects and networked multi-user exhibitions for VR projection systems, her work applies computer graphics art to various research domains, including educational multimedia, cultural heritage and virtual rehabilitation for stroke survivors. Daria’s work has been exhibited and published by ACM SIGGRAPH, IEEE VR, ISEA, among many others. Past projects have received funding from NSF, National Institute on Disability and Rehabili- tation Research and the Department of Education. A former Fulbright Scholar, Daria is currently partnering with the Hand Rehabilitation Laboratory to develop a multi-user virtual environment to aid in hand rehabilitation.