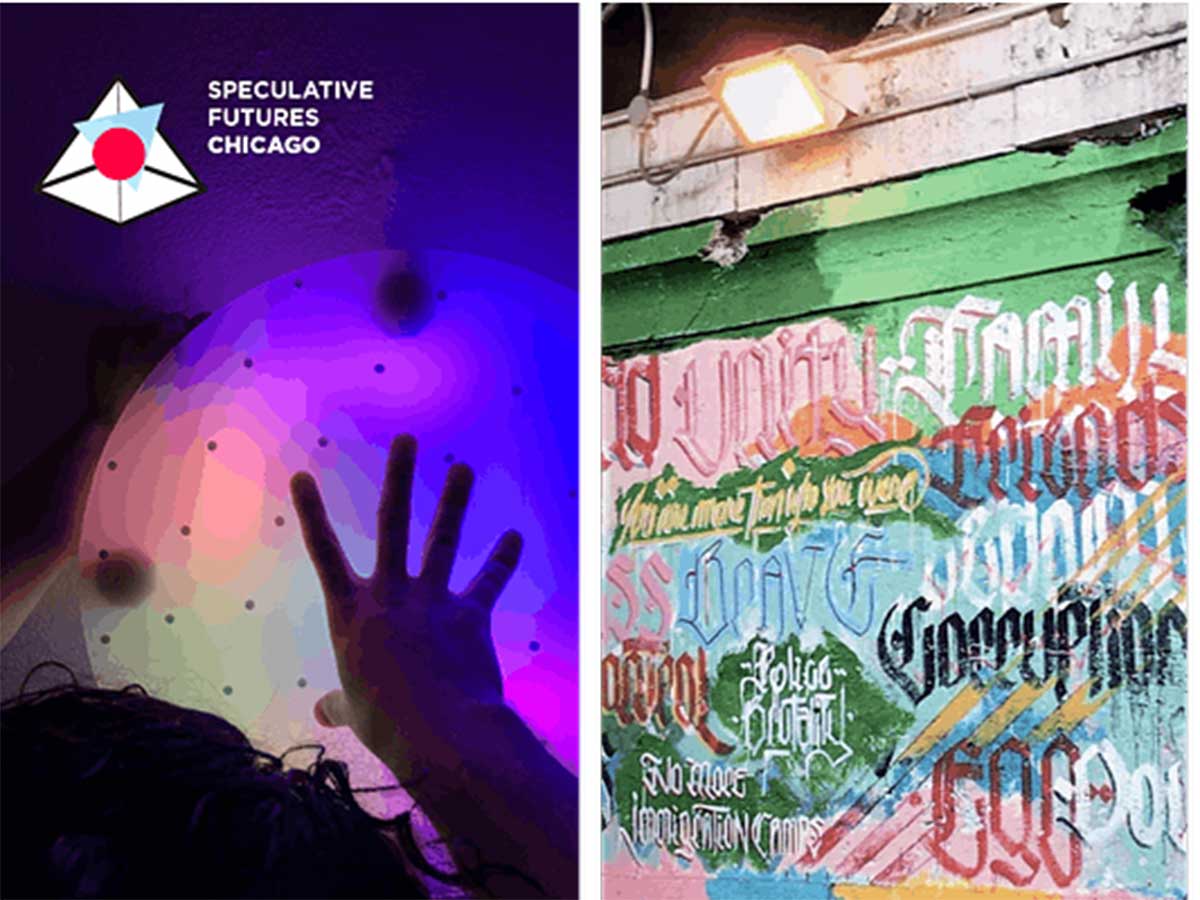 REIMAGINE is a panel talk with artists and designers who imagine alternate neighborhoods, societies, and worlds through their work.

Join Chicago Speculative Futures for a moderated panel with Chicago artists where we will discuss the power of art and design to imagine alternate neighborhoods, societies, and worlds.

Sir Charles is a pseudonym born from the gang violence that began to plague not only the streets in his neighborhood of Brighton Park, but also many other neighborhoods in Chicago. A drive-by shooting in 2015 at Shields Elementary School fueled his mission to combine Chicago gang lettering and culture with a personal twist of empowerment, forgiveness, and growth. This mission simultaneously documents personal struggles and battles with alcoholism and drug abuse as Sir Charles, or Life of a Busy Dad, as he’s also known, started a new chapter as a sober father for his daughter that continues to this day. In this panel, Sir Charles will dissect the gang letter font and discuss the connection between gang lettering and oppression, racism, segregation, and past economic issues, as well as the appeal of the lettering and its dual-lens in history.

South Side Speculations asks what is possible for young people to investigate their neighborhoods’ histories and imagine how to build healthier and freer futures. Resisting progress narratives that promise things will always get better and nostalgic accounts of carefree pasts. This exhibition asks how economic, political, and cultural structures evolve in the past, present, and future. We imagine alternative physical and social infrastructures for neighborhoods and communities, detail complex social determinants of health, and ever-present policing. Redirecting our scale of imagination, we seek to challenge the idea that all problems have solutions. The work you will see, hear, and touch should provoke questions about how we want the future of Chicago’s South Side to look, as it resists easy answers based on dominant representations of the city today.

“The Fictional Nations of Föhn, Delta, and Afterlife”

As we enter the third decade of the 21st century, we are met with an overwhelming sense of uncertainty about our collective futures and identities. With an important election year before us in the United States, we wish to use this space to offer alternate ways of considering the idea of a “nation.” From peaceful utopias to unsettling technocratic states, The Fictional Nations of Föhn, Delta, and Holy Land presents three speculative societies that exist across time: a quiet mountainous sanctum in the Alps, erased from history; a colonized stratosphere, inhabited by evolved human lifeforms; and an afterlife devoid of earthly freedoms—not the eternal bliss for which we had hoped. Using design fiction to press the issue of what it means to live in a post-truth world, the exhibit showcases “real” artifacts and “factual” accounts from these three nations. The publications take the form of guidebooks, offering detailed records of their respective homelands—chronicling evolution, social unrest, customs, governments, design systems, and more. We present both the plausible and impossible within these narratives, hoping to convey a taste of the many possibilities our future world(s) can hold. These projects were created as part of an undergraduate design fiction assignment at DePaul University’s School of Design.